Ravelry is a website about yarn crafts, and more specifically about knitting and crochet. If you don’t know Ravelry yet, I strongly encourage you to join it. It’s free and you have access to a gold mine of information in different languages about projects done by people all around the world, patterns (free or to purchase) and yarns.

Ravelry is also a place to join discussion groups. By definition, a group is a number of people gathering around something they have in common. The interest shared by the group can take endless forms. On Ravelry you’ll find groups per geographical area or per interests, other than yarn crafts specifically, on a wide variety of themes such as literature, movies, food, gardening… Today I’ll tell you about 2 groups with an interest for Tunisian crochet.

Ravelry is an American site and many groups have English as a default language. For those who would like to exchange in French, see the group Crochet tunisien. It’s a French speaking group with the objective to create a space on Ravelry for those who would like to share their experience about Tunisian crochet in French and find out more about other French speakers passionate about it.

A group has discussion threads. But also shared projects. Members of a group can decide to share their latest projects with the group and I find that feature particularly interesting to discover new projects I would not come across otherwise. You want to share your Tunisian crochet projects with French speakers? Do it with this group.

A new group has just been created. It is called Tunisian crochet explorers. I like the word “explorers”. It implies discoveries and adventures. Which is just right for Tunisian crochet, a technique that has so much more to offer than what is usually presented in books or websites.

By default, this group has English as the main language, but it is open to other languages. Should you feel more at ease to express yourself in a language known by another member, go ahead. The aim of the group is to present Tunisian crochet in all its diversities across the world, without any cultural boundaries, and to share innovative techniques to go beyond what is known in a given country.

The founders of the group are from different countries and have different designing styles, yet they are united by their common passion for Tunisian crochet and their wish to share ressources and knowledge in a constructive spirit. Yet the group is not limited to the designs of the founders. On the contrary. The aim is to explore together all the fields that Tunisian crochet has to offer. The approach is collective and inclusive.

Subscribe to my newsletter and get my pattern "Extraordinary garden" for free. You'll find detailed instructions with a photo tutorial on how to make the connecting stitch and short rows in Tunisian crochet.

This site uses Akismet to reduce spam. Learn how your comment data is processed. 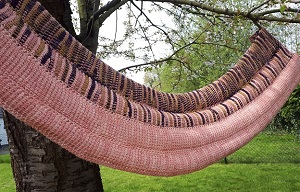 Subscribe to my newsletter and get my free Tunisian crochet pattern "Extraordinary garden".

Welcome to my blog!

and get my Tunisian crochet pattern "Extraordinary garden" for free.

In this pattern, you'll find detailed instructions and a photo tutorial on:

Your privacy is important and your email address will never be shared.
By signing up you will receive articles, special offers and tips about crochet in general

and Tunisian crochet in particular.You can unsubscribe at any time.

x
To get my free pattern "Extraordinary garden", subscribe to my newsletter!